I’ve been in Mexico City for almost a month now and all this time I’ve been saying to colleagues, acquantances and customers, “me gustaría coger el turibus” and “sería bueno saber coger los buses acá” and lots of other phrases using the word coger to express that it would be nice not to catch an uber, but get a bus instead.

Using the verb coger in speech comes naturally to me. I used it frequently at school and university when learning Spanish, and when in Colombia I used it without thinking twice. I was extremely aware that in some places you should avoid saying coger, because it isn’t used to take the bus, or grab something. It’s a rude word. A rude word we might use in English that begins with F and rhymes with duck.

Anyway. After numerous conversations somebody finally told me to stop saying it AFTER THREE WEEKS IN THIS DUCKING CITY!!! 3 weeks. I’ve said it to customers. Jeez.

So yesterday I finally got the chance to go out and catch the turibus. It’s one of those tour buses with recorded audio that you can hop on and off all day. What a blast! I had a lovely stroll round a Plaza al Servicio a la Patria and got told off for wandering into a military base. Whoops. The bus had a great recorded track with information about the stops along the way. It was a bit like a theme park ride, ducking and dodging the branches from trees covering the streets.

I got off at the Palacio de Bellas Artes and couldn’t believe how huge and impressive the marble building was. I walked through the park and paused to watch a beat-box battle on a bandstand, watched a large group of Mexicans dancing to salsa and cumbia music, and grabbed a bite to eat. I also encountered a creepy clown who stopped his act to talk to me and welcome me to Mexico. I hate clowns. Scary people.

It was a perfect day weather wise, so when I came across a fountain with kids running through it, I figured I’d join in. More fun than it should have been for someone who is now in their mid twenties. I sat down and played Pokemon (along with a few other hundred people) to dry off. My favourite person in this park was the elderly lady selling bits and pieces to the visitors. Her chant was a bit more original than the other Vendedores Ambulantes, “This is the PokéShop, here you can buy PokéSweets and PokéCigarettes. Come and get your PokéChewingGums”. Hahaha. Hilarious woman.

Back on the turibus I was brought round to Zocalo (Plaza de la Constitución). The huge square was cordoned off by huge Colonial government buildings, with the star of the show being the immense Cathedral. Outside the Cathedral there were indigenous groups performing ceremonies, singing, dancing and lighting incense. In the plaza a screen was erected and a small crowd had gathered to watch the Olympics. Inside the Cathedral there was a wedding in the main chapel, excitedly watched by lots of tourists from the edges of the church. Outside again I stopped in a bar to grab a drink, and got lucky timing to see the men’s 10,000 metre race at the Rio Olympics. Wow. What a race!!! I was excited to see Mo Farah run, cheering him on lap by lap. When he fell I was bloody gobsmacked, but felt so thrilled when he crossed that finish line to take gold! Gotta love Mo. It’s all that protein and practise, and being a nice guy. 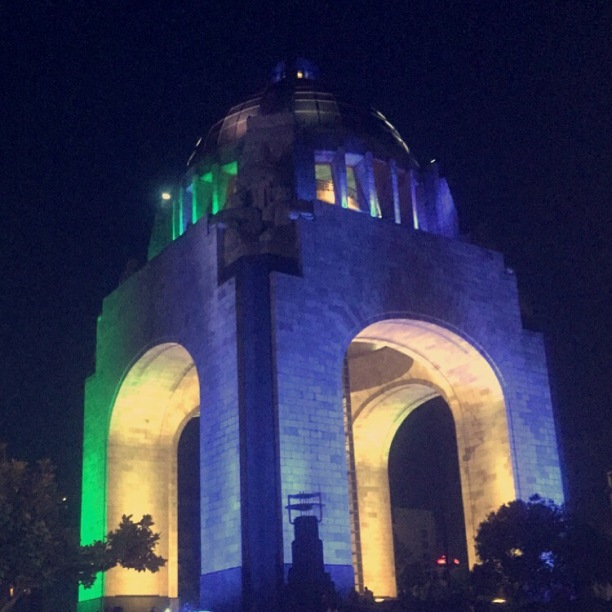 The final stop of the turibus was at the Monumento de la Revolución. An immense sculpture highlighted from the night sky with blue and purple illuminations. Inside I took the elevator to the top and got a panoramic view of the city after dark.

All my pics and vids from the day can be seen in my Snapchat story, below 🙂

Daniel- now a 20 something software salesman living in Mexico City. This blog is about my current life in Mexico City, and previous posts are dedicated to life in Barranquilla, where I spent a marvellous year working as an English teacher.